Skip to content
South Korean automotive company Kia has started taking reservations for its new electric car Kia EV6. The company has shared many pictures of the car as well as specifications on its social media channels. The new electric car was introduced on 30 March. The car uses the E-GMP platform, on which the Ioniq 5 electric car of Hyundai, the parent company of Kia, is built. The EV6 electric crossover is offered in three different trims, including the EV6, EV6 GT and EV6 GT Line. There are differences in power and some features of the three trims. Let’s know everything about it.

Hyundai’s subsidiary Kia is quite popular in India for its two cars Sonet and Seltos. Now the company is ready to make a splash in the electric car business. On March 30, the company introduced its new electric crossover Kia EV6 on the global stage. The company has its official Website But has also started taking car bookings. The new electric car is equipped with many powerful features. The company has built it on the E-GMP platform, on top of which the parent company Hyundai’s Ioniq 5 is also built. The company’s new logo can also be seen in the new car.

Talking about the basic specifications, the EV6 will come with two battery packs, with 77.4kWh battery in the top trim and 58.0kWh battery in the stand trim. As we said, the latest electric car has been launched in EV6, EV6 GT and EV6 GT Line trims. Of these, the top trim EV6 GT-line will be available with both types of battery packs, while on the other hand the EV6 GT will be made available with only 77.4kWh capacity battery. Another special feature of EV6 is that the car will be available in both two wheel drive and four wheel drive options.

Kia claims that the battery included in the EV6 electric car can charge up to 80 percent in just 18 minutes and can cover a distance of 100KM in a charging time of less than 4.5 seconds. However, which trim has talked about how much capacity of the battery, at the moment it has not been informed. It is offered with 800V and 400V charging capabilities. Not only this, no additional component or adapter is needed for this. 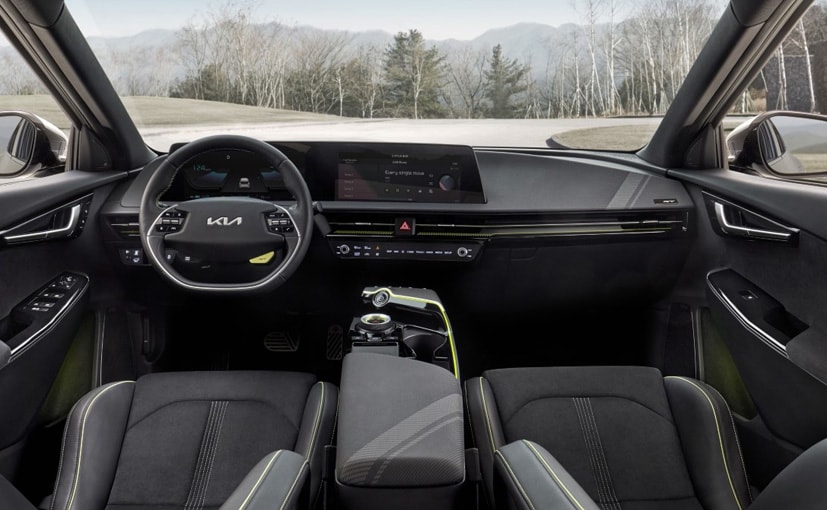 The Kia EV6 electric car will also have power. The 125kW capacity motor is being used in its standard trim two wheel drive option, which can propel the car from 0 to 100 km / h in just 6.2 seconds. Its four wheel drive option has an electric motor of 173kW. At the same time, talk about GT trim, its two wheel drive option used 168kW electric motor, which generates 229PS power. The company claims that it can accelerate from 0 to 100 kilometers per hour in just 5.2 seconds. Even more powerful will be its four wheel drive trim, which will have a 239kW capacity motor, which will generate 325PS power.

As we mentioned, the most powerful GT line will be the trim, using a 430kW dual motor. It generates a torque of 740Nm. The company claims that this trim can accelerate from 0 to 100 kilometers per hour in just 3.5 seconds. The top speed of this trim will be 260 km / h.

Company’s official global Website As per, booking of Kia EV6 has started in South Korea, Austria, France, United Kingdom, Italy, Spain, Germany and some other countries. In the coming time, the company will start booking it in some other countries including America, Poland, Iceland, Slovakia. The company has not shared any information about the launch of this car in India at the moment.